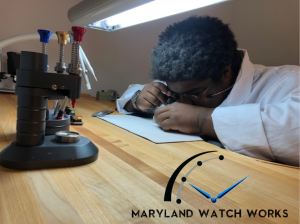 d the addition of a watch technician apprentice to its highly successful apprenticeship program.

Maryland Watch Works (MWW) celebrated its grand opening in July as hundreds of watch connoisseurs traveled to Hagerstown for the Wine, Whiskey, and Watches event. Held in the Potomac Walk between Bulls and Bears and Meinelschmidt Distillery, watchmakers from all over the world gathered to buy, sell, and display their products.

MWW co-founders Pierre (Pete) Brown and Eugene Stohlman organized this event and also celebrated the grand opening of their storefront located at 14 N Potomac Street, Suite B3, Hagerstown, MD. Washington County is proud to have timepiece and microbrand specialists as a local business.

MWW also proudly introduced its first watch technician apprentice, I’Kareem Buchanan. Mr. Buchanan began his apprenticeship with MWW in July 2021 and is learning how to disassemble and reassemble movements, along with learning the intricacies of watchmaking.

MWW received approval from the Maryland Apprenticeship and Training Council in May 2020. Due to the COVID-19 pandemic, operations at MWW were significantly impacted and there was a delay in getting an apprentice in person. On July 1, 2021, MWW officially signed I’Kareem Buchanan as their first apprentice.

This apprenticeship is particularly significant because it is the first state-approved apprenticeship program for watchmaking in the United States since 1969. The apprenticeship program is two years to become a watch technician and three years to become a master watch technician. With support from the Western Maryland Consortium, assistance for professional development and skills courses will be available for Mr. Buchanan, along with his day-to-day learning from MWW founders.

Mr. Buchanan was homeless prior to this apprenticeship due to a series of misfortunate events. After disassembling and reassembling a movement, MWW hired him on as their first apprentice. They worked closely with Horizon Goodwill Industries to find housing and accommodations for Mr. Buchanan. Not only is he on his way to becoming a watch technician, but his hope has also been restored. When asked what this apprenticeship means to him, I’Kareem said, “At first I didn’t have a goal, but now I want to master the abilities to make a watch so I can make a pocket watch. My goal is to create my own timepiece to leave my own legacy.”

MWW is working to bring watchmaking back to America, a field currently dominated by Switzerland, China, and Japan. MWW specializes in watch repair services, microbrand partnerships, luxury pre-owned and vintage timepieces, and has movements available for purchase. They are currently trying to manufacture an American Made automatic watch movement that meets the “Made in USA” Standard, something that hasn’t been accomplished since the Hamilton Watch Company closed its factory doors in Lancaster, PA in 1969.

Susan Grimes, Washington County Government Director of Business Development said, “It really is a special and unique trade that is remarkable to see from the intricate movements, through the creation of an exclusive timepiece, and it’s all done here in Washington County. The collaboration among community partners to pave the way for I’Kareem into the industry, as an apprentice through the State of Maryland, is equally as special as the watches he is learning to produce. We are so proud of Maryland Watch Works, and honored to have their remarkable trade in our community.”

To learn more about MWW, visit their website at https://www.marylandwatchworks.com/, call 240-850-2855, or email info@MarylandWatchWorks.com.

Article courtesy of the Maryland Association of Counties: https://conduitstreet.mdcounties.org/2021/08/09/washington-county-celebrates-launch-of-new-apprenticeship-program-in-watchmaking

Transition and Change are a Good Thing! The Year 2022 will be considered a year of transitions … END_OF_DOCUMENT_TOKEN_TO_BE_REPLACED

For 22-year-old Elizabeth Shoemaker, it all happened so fast. “So, in August of 2022, I lived with … END_OF_DOCUMENT_TOKEN_TO_BE_REPLACED